Just because the markets are closed doesn’t mean that traders aren’t closely watching the headlines. It’s hard not to with all the geopolitical and macro news hitting the wires.

Savvy traders are taking advantage of this “day off” to study and prepare for what I expect to be another volatile week for stocks.

So today I want to talk to you about one method I use to prepare: reviewing my mechanics and execution. More specifically, losing trades I’ve had…

As much as I hate to admit it, you can learn a lot from your losers.

However, it’s always best to learn from someone else’s losses.

That’s why, right now, I’m sharing three of the best lessons from my most memorable losses. 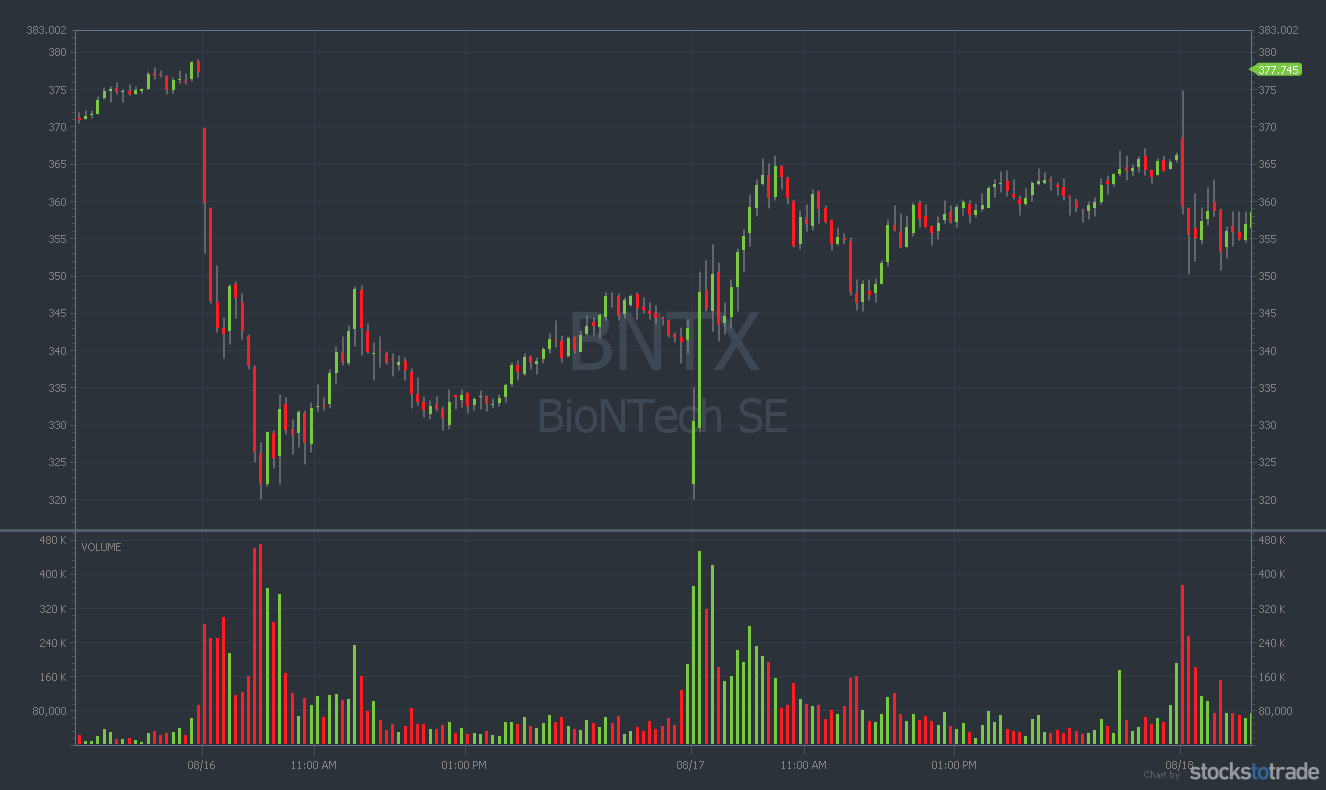 Back in August, I stepped outside of my usual put-buying strategy and did something a bit out of character — I bought calls on BioNTech SE (NASDAQ: BNTX).

Let’s put this in context. I’d been shorting the big pharma stocks ever since the epic blow-off top in Moderna, Inc. (NASDAQ: MRNA) on August 10.

The entire time, the MRNA and BNTX charts had been nearly identical.

But just like momentum runs inevitably run out of steam, short-term bear markets in hot stocks usually end with sharp reversals to the upside.

These bullish pivots can be incredible call-trading opportunities.

CAUTION: When a stock hits a hard bottom, it can be like a blow-off top in reverse.

But ultimately, my fatal error was trying to go long before the official first green day.

I broke my rules, entered the trade too early, and missed out on some HUGE gains.

Even worse, I let a big opening panic scare me away and I lost money!

This is a trade to learn from. I made a rookie mistake that I think every Evolver should try to avoid.

I saw the long reversal forming on BNTX, but I mistimed my call-buying.

The lesson? Never forget that timing is everything! Wait for the first green day and adjust your trading plan from there. 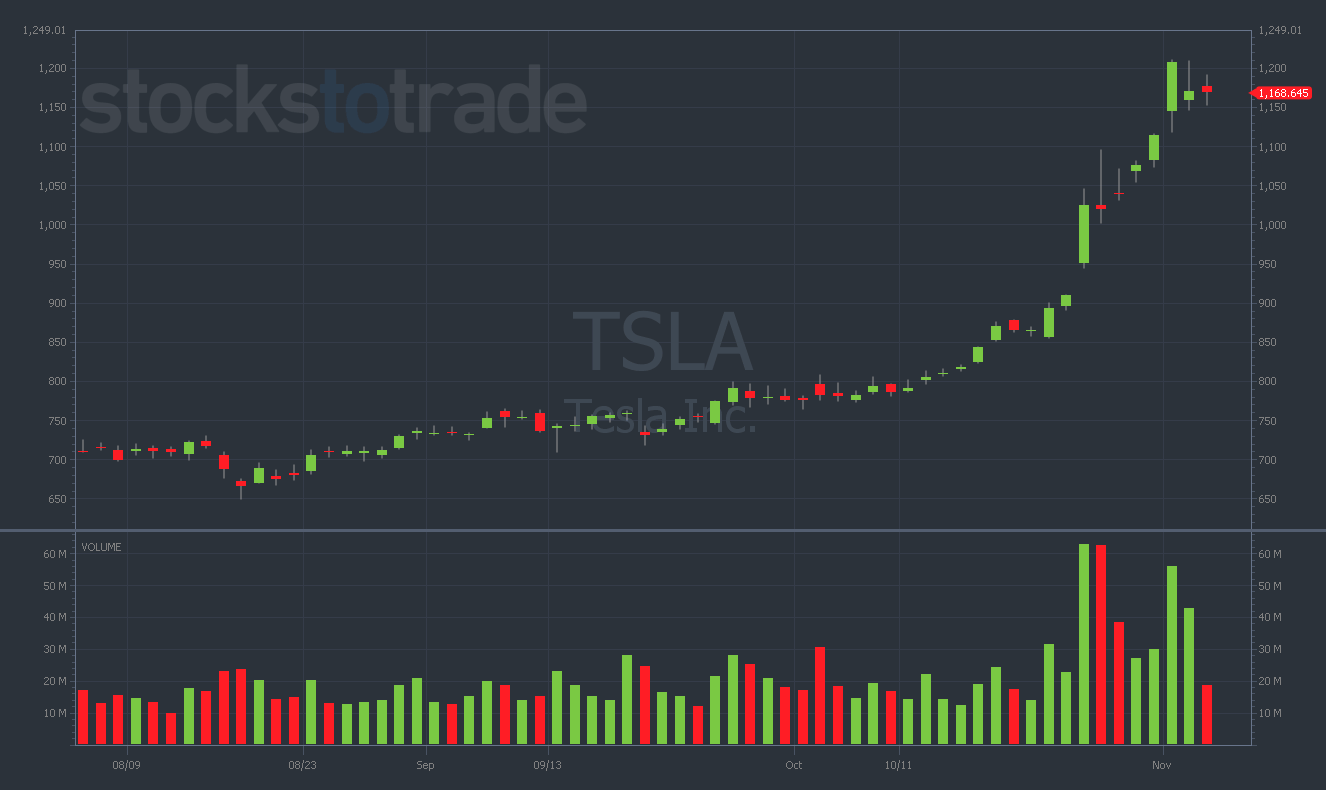 The same lessons that emerged from my BNTX trade — the importance of timing and patience — came roaring back into my mind when I bought puts on Tesla Inc. (NASDAQ: TSLA) in November.

It seems like every trader who’s ever tried to bet against TSLA has failed. After this regrettable trade, you can add me to that list.

But can you blame me (or anyone) for trying?

Big Picture: When I put this trade on, TSLA was up 50% in just over a month!

On Tuesday, November 2, I made some critical errors while trading TSLA…

As I was watching the chart, it looked like every intraday bounce attempt was failing. The share price was stuck under the VWAP.

Naturally, I thought it was time to buy some puts…

But I was dead wrong!

TSLA rallied 2% into the close and I sold my puts for a loss. My timing was terrible!

Moreover, I entered a trade that had proven to be a historical loser for nearly everyone who had tried it before me.

In other words, I made my job harder than it needed to be. I shouldn’t have attempted to nail a difficult trade when the market is filled with amazing opportunities.

The lesson? Be patient. Don’t try to be a hero. And leave the historically difficult trades for some other trader to worry about.

Throughout my career as a trader, I’ve often found that the most valuable lessons show up to greet your mistakes over and over again.

This makes sense if you think about it…

If you make the same mistake more than once, that’s a sign. There’s a specific area of your trading that you MUST work toward improving.

When I attempted (and failed) to call the bottom on Meta Platforms, Inc. (NASDAQ: FB) earlier this month, I was reminded of the same mistake I made back in November on BNTX.

FB’s been on a steady downtrend since its horrible earnings report on February 2.

I should’ve waited for the first green day before buying calls.

But the sentiment around FB stock is so bad that even the first green day on didn’t save the price action.

On February 9, FB had a solid first green day and looked like it could rally out of its bearish slump.

But the next day, the downtrend resumed like the first green day never even happened.

The lesson? Sometimes the near-term sentiment on a stock is so negative that it becomes untradeable on the long side. I shouldn’t have attempted to make a heroic bottom call on FB.

If you aren’t honest with yourself about your mistakes, it’s nearly impossible to avoid those errors in the future.

I suggest every Evolver does the same thing I did today. Go over your recent losses and zero in on the worst aspects of the trades.

Take detailed notes of what you find, and then make a promise to yourself. Never make those same mistakes again.