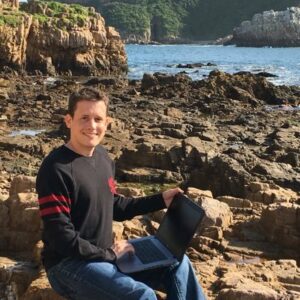 The Beginning of Mark’s Evolution

Mark Croock is a former accountant who’s had a life-long fascination with the stock market.

When he was in eighth grade, he joined a stock market competition. The experience excited Mark. He’d check stock quotes as soon as he came home from school. Mark won that competition.

Even after the competition was over, he continued to feed his passion by reading up on companies to look for longer-term winners, such as AOL and Yahoo. He’d pick a basket of stocks that he thought would do well, then follow up with them to see how they did.

Looking back, Mark could kick himself for not aggressively buying up Microsoft and Google!

When it came time to pick a career path, Mark considered his love for numbers and decided to become an accountant. It wouldn’t last long, though. Mark has always craved more — the potential to earn more and the potential for more freedom.

But his accounting career wasn’t all in vain. It helped him develop an eye for spotting risks — that has come in handy in his trading career.

Mark wanted a career that provided more flexibility in his schedule. He started to save up money. His goal was to follow his childhood passion for the stock market. Mark wanted to generate extra income that would help him build a new future.

With the money he saved — along with money he received from his bar mitzvah — Mark opened up a trading account with $50,000.

It was tough going in the beginning … The first two years of Mark’s trading career were a grind. He had no significant wins to show from his efforts.

But he didn’t have big losses, either. The mindset he picked up while working as an accountant helped him to stay disciplined. Lucky for Mark, he developed a habit of cutting losses quickly early on in his trading career. That mindset helped protect Mark from going the way of so many traders and blowing up his account.

Mark has always had a “glass half empty” point of view. That explains why most of his plays were shorting companies with bad fundamentals. He was on to something…

In 2009, he ran across a YouTube video by Tim Sykes. It introduced Mark to a whole new perspective on trading.

Mark was hooked. He devoured all of Sykes’ content he could get his hands on.

Back then, Tim largely shorted stocks. And that’s when Mark learned about Tim’s unique strategy of shorting “pump and dump” stocks. He was intrigued…

So Mark became one of the first students to join Sykes’ Pennystocking Silver program. He liked this new method of trading. In those days, it was common for companies to participate in pump strategies. So Mark learned to adapt and join in on some plays of his own.

He felt it gave him a clear edge. Rather than going in on just bad fundamentals, Mark had more indicators to look for in trades. Before this, trading felt more ambiguous, and because of that, he lacked confidence in trading.

With Sykes’ strategy, Mark saw a clear reason for stocks to move up or down. This clarity helped him to find the missing confidence he needed. It gave Mark a reason to be more aggressive in his trades.

Similar to Tim at the time, Mark approached stock pumps with a shorting mentality. He thought it made more sense to short rather than buy these pumps to grow his account since the fundamentals were so bad.

Mark now notes this mentality likely had something to do with his personality … He has always had a glass-half-empty point of view.

Mark knows his negative bias is something to work on … You can’t be too negative if you want to be successful.

But he’s always had an entrepreneurial mindset. And that was key in his motivation to try new things. At some point, Mark had to jump in and get over his fear of losing.

Every successful trader needs some sort of risk tolerance.

After a few months of learning Tim’s strategy, Mark decided to take a big leap … He quit his accountant career to pursue trading full time. Although accounting provided what seemed to be a safe and secure salary, it would never provide the freedom he desired.

Mark’s entrepreneurial spirit pushes him to try different things — and that desire has only increased with his trading career.

In 2011, Mark upgraded from Pennystocking Silver to the Trading Challenge.

He saw an opportunity to master the trading craft. Mark was driven to become one of Tim’s best students. He watched every one of Tim’s videos at least twice (legend has it he’s watched most at least three times) — and he categorized every video for Sykes and other Challenge students.

Mark also started helping with various projects from webinars to Skype calls with other students.

After making his first $200,000 in 2013, Mark became interested in teaching others to trade. He saw that Tim’s schedule was getting busier and that he needed help. Mark jumped at the opportunity to get involved.

But he didn’t let up on his trading. Along with continuing to trade penny stocks, he continued to look for opportunities to expand his skillset…

In 2015, Mark noticed a lot of IPO stocks would get overextended while having lock-up agreement dates — that’s when insiders in the company could start selling their shares.

These stocks would sell off 10%–20% over a few weeks as they got closer to the lock-up date, and this became a predictable catalyst for Mark. He started experimenting with put options to make money when these stocks would go down. And he had a good amount of success doing it, making about $20,000.

Later that year, Mark started to see that he could get a lot more leverage in his trades and essentially risk less money. He saw the potential to multiply his investment sometimes 300% very quickly if the stock moved in the direction he needed. It made sense to him that he could take smaller positions and grow a small account using the options trading strategy. He’d take advantage of the volatility instead of tying up too much of his capital.

It also gave Mark the opportunity to expand beyond penny stocks…

When he traded Beyond Meat (NASDAQ: BYND) in 2019 with his new options strategy, a light bulb went off. He saw that if stocks were in a hot sector, he could potentially play options both ways. He adapted his strategy and made about $150,000 in six months.

But one of the biggest lessons anyone can learn from Mark is that with trading, it’s often…

A Slow Grind to Success

Every trader needs to set realistic expectations when it comes to finding a consistent strategy.

It’s not different in Mark’s story — he didn’t see real success until his third year of trading. His first few years entailed a lot of grinding with no significant wins.

But he managed to keep his losses small because he was picky with his trades. As he notes, he didn’t necessarily choose the right setups, but he had a lot of discipline to cut losses and not let anything blow up in his face.

As Mark gained a better understanding of stock momentum, he learned to recognize sector momentum, too.

Sector momentum plays led Mark to the most significant amount of profits in his career. Instead of scalping stocks, concentrating on sectors helped him become more patient. It’s how Mark learned to wait for the right plays for his strategy. Then he’d ride the momentum.

These days, Mark makes more money than he ever dreamed after he grew and evolved his strategy. But for him, it’s equally important that he shares his journey to show everyone that it didn’t happen overnight.

Instead, it took years of hard work, commitment, knowledge, and strategy.

Mark has found a strategy that has proven successful for him, but he’s more committed than ever to continue improving.

Mark now runs an options trading service called Evolved Trader. He’s taken the penny stock rules he learned from Sykes and applied it to a new niche. As Mark and his wife raise their family of three children, it’s also important for Mark to continue growing his trading community. 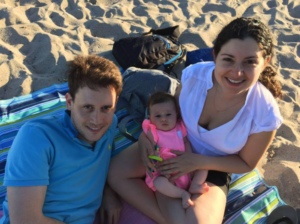 Mark is a deeply devoted man.

He’s a dedicated husband and father of three — Mark’s wife gave birth to their latest addition to the family in May.

And he’s devoutly Jewish and observes Jewish holidays with his family. In the holiday season of 2020, he noted celebrating Hanukkah with his family. They lit candles for eight straight nights. And they spent quality time together, eating lots of food, including Mark’s favorite, sufganiyot — an Israeli jelly-filled donut fried in oil.

For Mark, it’s important to spend time with his family and observe his Jewish rituals and heritage. That helps him stay grounded through the stresses of trading.

He’s also dedicated to trading and teaching. Mark’s eager to share his thoughts and progress with his students. He’s open about the challenges trading can bring, like greed and FOMO leading to less than desirable trading decisions.

And similar to Sykes’ goal in the Trading Challenge, Mark wants to eventually create millionaire students.

He knows it will take time. But ultimately, he wants to mentor students who are new to options. His goal is to help them become self-sufficient traders who hit big milestones and gain the ability to make full-time incomes in the market.

Mark also looks forward to continuing to grow his personal account and looking for new opportunities and strategies in the market.

There’s an old saying among traders … “fortunes are made in bear markets.” But have you ever...

END_OF_DOCUMENT_TOKEN_TO_BE_REPLACED

Happy Friday, Evolvers! I think everyone’s ready for this week to be over … it’s been a bumpy ride...

END_OF_DOCUMENT_TOKEN_TO_BE_REPLACED

Why (and How) I’m Preparing for a Potential Market Meltdown

I’ve said it before and I’ll say it again — I think the overall market is headed lower this year....