Have you ever discovered a trade setup you liked, but for whatever reason, didn’t pull the trigger on it?

And of course — it’s always the ones you don’t take that end up working perfectly.

Instead of watching the profits flow into your account, you’re just a spectator, screaming:

Now, for some traders, a missed trade opportunity can lead them down a destructive path.

It may force them to jump in and out of trades (revenge trading) in hopes of making up for “what they should have gained.”

That kind of mindset will just kill your progress.

And while it sucks to miss out on “easy money” trades, remember:

There Are Always New Opportunities

That’s why it’s essential to have a “win or learn” mindset.

Today I want to go over a recent trading mistake I made (and discuss how I’ll work to avoid similar problems in the future).

The Nasdaq had been green four days in a row and the volume was starting to decline. I thought the odds of a reversal to the downside within the next week were high.

But by the early afternoon, QQQ had started to mount a small rally — and my puts were down nearly 25%.

At this point, I had to make a tough decision…

Go with my gut and hold the puts … or stick to Tim Sykes’ number-one rule and cut my losses quickly?

I couldn’t ignore the number-one rule, so I sold the contracts two minutes before the close. Then the real pain began…

By getting too wrapped up in a fake relief rally, I missed out on a potential 100%+ trade. Take a look at the chart. 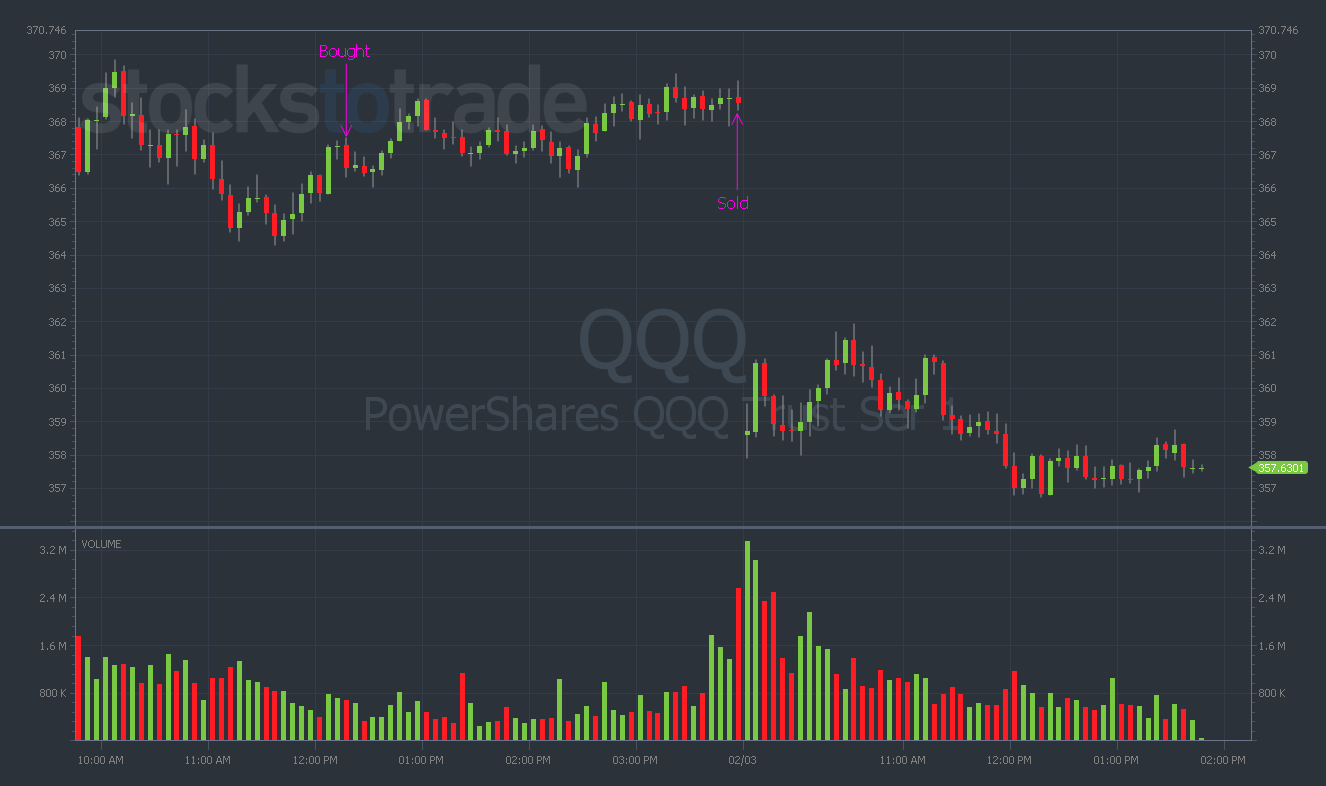 I’m determined to avoid this outcome in the future. And I think there’s one specific aspect of my trading that I need to focus on…

It’s All About the Big Picture

After looking back on some recent trades, I think most of my mistakes boil down to one general idea…

I’ve said it before, and I’ll say it again — it’s all about the big picture!

Trust your gut. The stock market (especially this one) will constantly try to fake you out of your conviction. Don’t let it succeed.

Even though QQQ was gaining some steam in the afternoon, the price action wasn’t strong enough to justify my blunder…

And aside from the technicals, the economic backdrop looks terrible for tech stocks.

The Fed’s preparing to hike interest rates and taper asset purchases. Not to mention the U.S. is experiencing the most severe inflation in four decades…

In hindsight, the bearish indicators on QQQ far outweighed the bullish signals. But sometimes it’s difficult to see the big picture in the moment.

Anyone who day trades should be able to relate to this. Your immediate reactions can occasionally overtake your big-picture trading mindset. But this is almost always a mistake.

You must address your faults head-on and evolve past them. Make a promise to yourself to never make the same errors again.

There’s usually way more to gain from sticking to your initial conviction than in allowing short-term trading signals to veer you away from your overall plan.

And one more thing … If you sell a position too early, don’t fall into the trap of counting the gains you could’ve had. That trade is over, so move on!

Keep your mind on the big picture. NEVER let minor hiccups distract you from major indicators.

Mistakes are an unavoidable reality of being a trader. You’ll never nail every setup perfectly…

The important thing is that you evolve from your mistakes. Let the money you lost (or left on the table) buy you some critical knowledge that you can use in the future.

Dust yourself off and STUDY HARDER. That way, the next time a five-star setup emerges from your watchlist, your preparation can meet the opportunity.