I think everyone’s ready for this week to be over … it’s been a bumpy ride for the stock market.

It was particularly difficult to gauge market direction this week. (Even for me, someone with over a decade of experience as a professional trader.)

In my defense, I was out on Monday and Tuesday for Rosh Hashanah. (I can’t remember the last time I took two trading days off in a row.)

My time off might’ve affected my grasp of the technicals as I was forced to play a bit of catch-up on Wednesday morning.

During the mid-week, I was seeing what I thought were bottoming signals in the overall market.

But by Thursday morning, my bullish outlook had been rolled over by unstoppable selling. I flipped on a dime and I’m now positioning myself for another major market dump.

The S&P 500 ETF Trust (NYSEARCA: SPY) has closed red seven out of the last eight days (something that hasn’t happened since 2020)

Furthermore, the index is now trading below the previously-established June low closing price of $365.86.

And this is a very bearish indicator…

If the SPY can’t reclaim a closing price above the June lows, look out below. As I mentioned yesterday, I think another leg down in the overall market is imminent.

Anyway, that’s enough forecasting for one day. It’s Friday, so let’s get to the Q&A…

“What made you buy calls on FDX? You rarely trade calls and I’ve never seen you mention this ticker before…”

You’re right, during a normal period I probably wouldn’t have put this trade on…

But once again, this is a very unique moment in history, which means adjusting your strategy to whatever the market calls for.

Two weeks ago, FedEx Corporation (NYSE: FDX) reported a huge decline in package deliveries, tanking the stock 24% intraday in its biggest single-day decline since the 1980s.

You’re in on Friday… And Out on Monday

You’re in on Friday… You’re out on Monday.

When a stock tanks to its lowest level in over 40 years, I’m immediately on high alert for a potential bounce play.=

This comes down to psychology. I know a lot of people are watching the stock for a potential ‘gap fill’ bounce.

Traders, like you and I, will relish the opportunity to catch the upside momentum after such a huge drop, which can create exponential buying pressure if the stock finds a bottom.

That’s why I traded FDX calls. About ten days after the report, I started to see bottoming signals in the chart around the $140 level. That’s when I bought my calls.

On that topic, I don’t recommend buying calls immediately after a huge single-day dump. Oftentimes, stocks fall even further in the days following a terrible earnings report.

Back in February, I attempted (and failed) to call the bottom on Meta Platforms, Inc. (NASDAQ: META).

The company reported its worst-ever earnings while the stock experienced the biggest single-day wipeout in the history of the market, dropping from $323 to $238 overnight.

I thought there would be a quick bounce on such a widely-traded name, but I was wrong and sold my calls for a loss.

And anyone who bought the stock there has lost more. META has dropped another 100 points since, trading for $138 at the time of writing.

The lesson? You’ve gotta wait for a base to form, only then can you consider playing the bounce after a massive dump.

“I’ve made a few bad trades in a row and I’m losing confidence. How do you get back on track after demoralizing losses?”

Whenever I’m experiencing a lack of confidence, I remind myself why I started trading in the first place…

Back when I first joined Tim Sykes’ Trading Challenge over 10 years ago, I had one goal — to quit being a general accountant and make trading my full-time job.

The Millionaire Strategy ANYONE Can Use 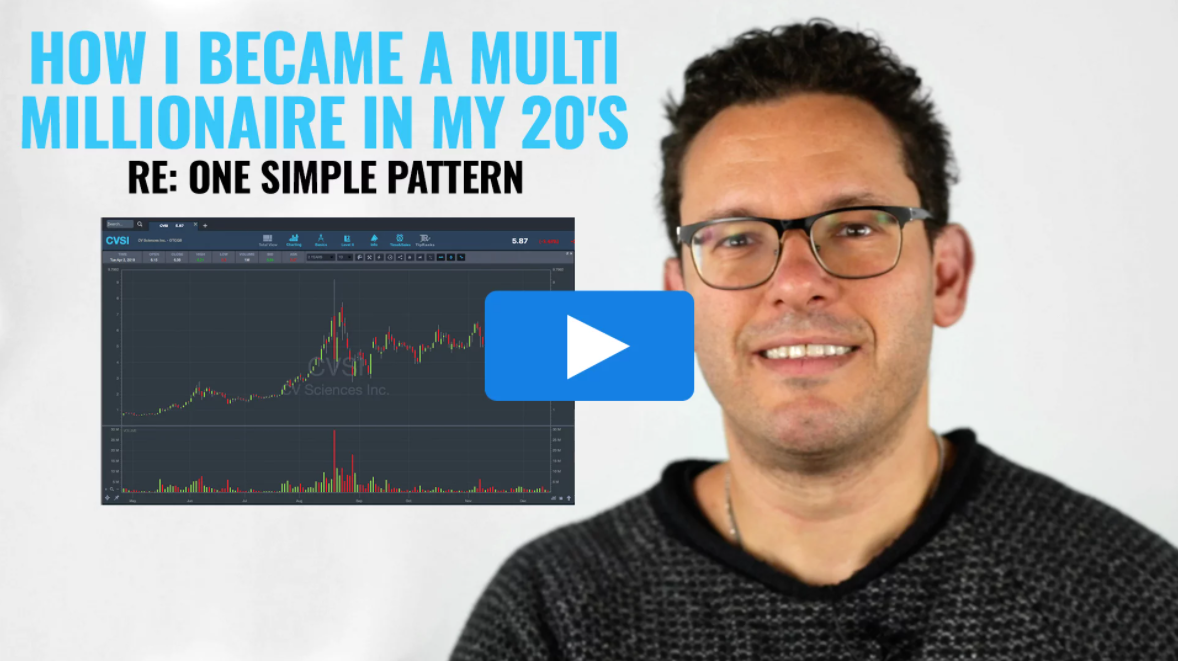 Twenty-five of my millionaire students have used this exact pattern…

And I KNOW it could potentially do the same for YOU!

So, it’s probably important to ask yourself the following questions…

What’s your ultimate goal? Why are you trading in the first place?

The stock market isn’t for the faint of heart. There’s gotta be a reason why you go through the pain.

Identify the reasons you wanna be a trader and focus on them during periods of stress.

This broader perspective is important. It should remind you that you have a destination. Road bumps are a part of the journey.

A few mistakes — even big ones — shouldn’t change your long-term trajectory.

Consider the big picture, accept that your path won’t be straight, and remember your long-term goals.

Trading the stock market isn’t easy. You’ll have many ups and downs and you’ll make plenty of mistakes along the way.

In times like these, you’ve gotta find ways to remind you of what’s important — your goals.

If you focus on your goals, you can fight back from losses to become a better (and more confident) trader.

Have a great weekend, Evolvers!