On Monday, I broke down why meme stocks — like AMC Entertainment Holdings Inc. (NYSE: AMC) — were at the top of my watchlist heading into this week.

I’m always looking for former runners — resurging with volume and volatility — to buy puts on near the top. And AMC checks all of my boxes.

Back in July, I traded AMC puts (following the stock’s infamous short squeeze) to utter perfection … locking in a gain of nearly $55,000 in a single trade!

But like anyone, sometimes I nail my trades better than others. This week’s AMC trade was one of the ‘others’…

I miscalculated my timing, let my emotions get the best of me, and took a massive $60,000 loss because of it.

That said, I don’t regret my thesis going into this trade. I regret the way I handled it.

As you’ve heard me say before … my idea was right, but my timing was off.

Additionally, I let my emotions cloud my judgment at certain points in this trade. This is a HUGE MISTAKE that I want to help YOU avoid in your trading.

With that in mind, let’s go over why I traded AMC puts (and what I plan on doing differently next time)…

Why I Bought AMC Puts

As a trader, you have to try to understand where a stock currently lies in the trajectory of a big move.

What do I mean by this?

Stocks tend to react much differently early on in their parabolic runs than they do late in the cycle of an uptrend.

Why should you care?

Because if you know what to look for, these patterns are predictable and repeat over and over again. And reliable patterns can lead to incredible trading setups…

AMC is a great example of a “late in the game” trade, where shorts tend to have a built-in psychological advantage over longs.

Consider the big picture — AMC was green 10 days in a row before its first red day on Tuesday! Look at the daily chart… 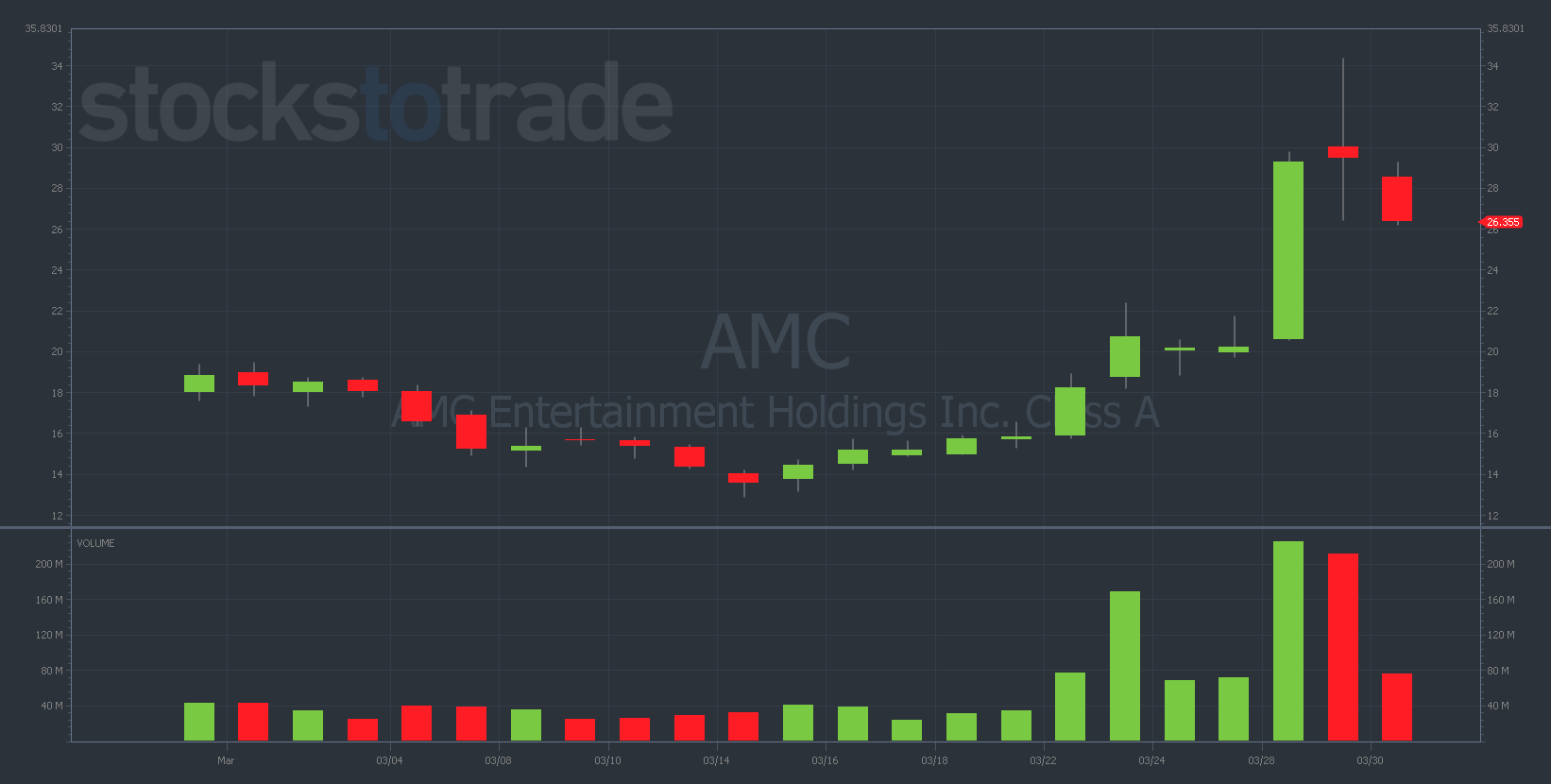 Bottom line: The major gains have already been booked on the long side — and the shorts know this.

The experienced bulls likely sold into strength long ago and moved on, leaving the stock a prime target for short sellers and negative-biased put traders like me.

When the psychology of the trade is at this stage — with desperation and panic beginning to noticeably set in — it’s time to be aggressive.

Under the right conditions, this can be a five-star setup with a high probability of success. And those don’t come around very often when trading weekly options.

3 Things I Should Have Done Differently

Reflecting on this regrettable trade, I see three things I should’ve done differently…

But in a momentary lapse of judgment, I let the risk management of this trade get away from me. And I paid the price for it.

I’ll be honest … this loss stings. I don’t have any excuses for taking such a big loss.

All I can do is make a promise to myself and Evolvers — that I’ll cut my losses quickly on every trade to avoid oversized losses like this one.

The best traders divorce their emotions from their moves in the market. I’m usually pretty good at this, but we’re all human…

Going into the AMC setup, I was still reeling from another HUGE loss on Tesla Inc. (NASDAQ: TSLA).

It was difficult to see in the moment, but my mindset was heavily affected by my emotions following the TSLA loss.

I wanted a win, so I piled into puts on a stock that’s treated me well in the past — good ol’ AMC…

But this is the wrong way to approach a trade psychologically. You should never enter a setup just because you wanna make your losses back.

This is a recipe for DISASTER that I foolishly fell victim to. Don’t make the same mistake I did — keep your emotions in check!

3. Focus on My Timing (and My Sizing)

I’ve said it before and I’ll say it again — timing is everything!

You can be 100% right on a trade thesis, but if you enter the position too early or too late … you might as well be 100% WRONG!

This is even more true if you’re trading options. If the stock moves just a few percentage points in the wrong direction, your contracts could lose 30%–50% of their value.

Well, welcome to my week. My timing was wrong at every turn — and I paid dearly for it.

When you’re trading with size, this sort of loss can punish you greatly. I shouldn’t have gone so heavy on this trade, and I certainly should’ve considered my timing more carefully.

I’ll be honest … I haven’t been trading my best recently.

During these periods where I’m not on my A-game, I think it’s important to get away from the screens for a while and mentally reset.

In that spirit, I’m off to Israel with my family for a few weeks.

I’ll still be writing and trading, but I think this trip will be a good way for me to clear my head — and get back to crushing put trades.